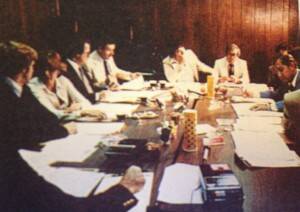 Pivotal meeting of state legislators and the fledgling MFA board in September 1975. Sen. Joseph Fidel encouraged legislators to work with the MFA board to get they organization off the ground.

Confusion also surrounded the role and function of the state legislators who comprised the newly-formed Mortgage Finance Authority Act Oversight Committee. But Sen. Joseph Fidel stepped up to encourage legislators to do everything they could to make the act work successfully. “If serious problems arise, the legislature may have to scuttle the act,” Sen. Fidel said, according to meeting transcripts. “But if both groups meet consistently until the program is off the ground, the act will be a useful vehicle for low-income housing.”

The oversight committee did work diligently with MFA’s board for more than a year. During that time, MFA received support from four New Mexico banks that put up letters of credit for its first bond issue: New Mexico Savings and Loan, First National Bank of Albuquerque, Albuquerque Federal Savings and Loan and Southwest Mortgage. With everything finally in place, MFA executed its first bond issue in December 1976. That $20 million bond sale was followed by another $38 million bond sale in June 1977. MFA was officially launched.